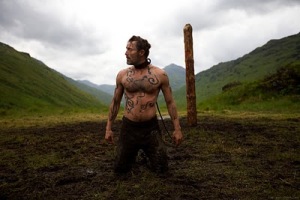 To say that Nicolas Winding Refn’s Valhalla Rising (2009) is a quiet film is not to say that it lacks impact or even action.  There’s not as much action as a typical Hollywood film-goer has been trained to expect, but when violence erupts on screen you can almost feel the blows against your own flesh. Yet, I would still say the film is quiet. As the protagonist, Danish actor Mads Mikkelsen utters not a single line of dialogue during the film’s entire hour-and-a-half running time, and very few of the other actors say much more than that.  But even without much dialogue this film speaks volumes more than lesser films manage with their empty banter and their relentless if barely coherent plots.

Some will complain that this film doesn’t have enough of a plot, but again that all depends on what you’re used to seeing on the screen.  Valhalla Rising satisfies itself with a simple and almost plodding story. Ultimately, this film isn’t very concerned with that bare-bones plot; it has other things in mind.  The story, such as it is, follows Mikkelsen as One Eye, a stoic warrior who escapes from slavery as a gladiator and joins a somewhat confused Viking Crusade that sets sail from the Scottish Highlands and ends up in “Hell.”  Mute and half-blind, One Eye proves himself adept surviving through barbaric times with only his brawn, brains and unflinching willingness to use brute force against just about anyone and everyone.  But again, the action that strings this film into a somewhat puzzling story doesn’t begin to describe the visual experience of watching it.

This film compels with its beautiful cinematography.  Under a hypnotic soundtrack, we are stunned by shot after shot of the emerald green highlands, gorgeous evening skies, underwater blues and reds, bare skin speckled with crimson blood, hair matted with mud.  I suspect the problem for most viewers, and the reason this film hasn’t garnered more attention, is that Valhalla Rising is neither fish nor fowl.  The violence is far too shocking and graphic for those who enjoy art-house films but the pace is far too slow and the plot too confusing to hold the interest of those looking for action.  This movie seems sort of like Conan the Barbarian as filmed by Ingmar Bergman, if you can imagine such a thing.

For those who can stomach it, this film offers wonderful rewards, but it’s not for everyone.  After two viewings I’m still pondering One Eye’s final enigmatic action.  Personally, I found Valhalla Rising mesmerizing and powerfully moving.

Four out of five stars.

One thought on “Review of Valhalla Rising”