I recently revisited one of my favorite comedy films with my friend and colleague, Dr. Meg Roland. Meg is presenting a short talk at the Oregon Museum of Science and Industry (OMSI) this week in advance of their screening of Monty Python and the Holy Grail. Meg is probably one of the top medievalists on the west coast, so it’s no surprise that she would be asked to give her professional opinion of the English troupe’s take on the legend of King Arthur.

Meg’s a good friend and I was happy to play along, but I didn’t expect watching the film to touch on my own scholarly interests as heavily as it did. I hadn’t actually watched Holy Grail for probably twenty years, but I’d seen it so many times in high school that my friends could quote long passages from it verbatim in outrageous British accents.

Okay, yes, I might as well admit it. I was one of those socially awkward nerdy kids who felt more at home with the tabletop adventures I had playing Dungeons & Dragons than I did venturing across the darkened auditorium at a high school dance to brave asking one of the girls to dance.

This was way before being a nerd was cool. Believe me, it was painful at the time.

This was also long before I found that my endless fascination with detectives and with crime and horror fiction could translate itself into a rich academic life. (N.B.: I mean “rich” here in the sense of fulfilling, not remunerative; the scholar’s life these days seems to include a vow of poverty.)

In the old days, when I would watch Holy Grail with my friends and quote the lines along with the actors, we tended to ignore the strange intrusions of the stuffy historian killed by the knight and the subsequent interruptions by the uniformed police trying to arrest the professor’s killer. But imagine my surprise in discovering upon re-watching the film now that these oddly modern intrusions by the cops, the weird interludes that formerly seemed to disturb the magic and humor of Arthur’s quest, can actually be seen as advancing a relatively insightful argument very closely related to my own scholarly interests.

A lot of the laughs in the film derive from the conflict between pre-Enlightenment and post-Enlightenment modes of thought. The witch trial scene, for example, gives us poignant parody of scientific thought where pre-Enlightenment thinkers struggle to understand cause and effect. The rabble, of course, doesn’t care about mastering logic. They just want an officially sanctioned excuse to burn the poor woman they’ve dressed up as a witch. King Arthur and Sir Bedevere are earnestly trying to gain a deeper understanding of natural laws, even as their bumbling attempts spark our laughter. 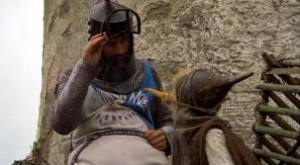 But this push toward post-Enlightenment thought is telling because the rise of science and rationality ultimately spells the end of the myth and magic of King Arthur and his knights as well as the pageantry and glory of monarchy and church.

At the core of the cultural shift during the Enlightenment is a radically new way of understanding truth. No longer would Truth come from on high, handed down by God through his chosen representatives on earth. The new truth becomes understood as a narrative construction told from interwoven and sometimes contradictory points of view.

After the Enlightenment, instead of Truth with a capital “T,” we are left with a contingent and fragile truth, now forever with a lower-case “t.”

Consider how the scientific method works. We come up with a hypothesis and then we test it against evidence. If the original hypothesis doesn’t account for all the available evidence, we must revise it.

Our courts of law start to work in the same way. Rival lawyers develop competing narratives. Juries decide which story seems to best explain every existing piece of evidence. Once the jury votes, the judge declares that version to be the verdict in the case and pronounces a sentence.

The post-Enlightenment gives rise not only to new forms of government, like American democracy, but also to police forces charged with maintaining law and order on behalf of the citizenry. Initially the police are only charged with preventing unrest and stopping crimes in progress, but fairly quickly it becomes clear that the police and courts need a way to deal with crimes that have already been committed but for which there is no clear culprit. They need specialists who can apply the scientific method to solving mysterious crimes and serve as consultants to the police. They need the detective.

Not coincidentally, the detective figure becomes the hero of our new post-Enlightenment literature. The Enlightenment had already destroyed the magic of Arthurian romance, so we needed a new heroic to populate a new sort of “realist romance,” a figure who could embody the ideals of the new era.

We need somebody who can arrest our long-standing enthusiasm for these ridiculous stories of knights and sorcerers and holy grails.

That’s precisely the exchange enacted by the close of Monty Python and the Holy Grail. After all the fun and laughter and silliness, we need to be serious grown-ups who establish law and order. The film’s tweed-clad historian is slaughtered by a knight after he breaks the fourth wall, addressing the audience about Arthurian stories as if they were fiction.

The irony, of course, is that the historian and his ilk are the ones actually killing off the old tales (at least metaphorically), even if the knights are better armed. Culturally speaking, Arthur and his knights are living on borrowed time. Eventually, the police arrive at the end of the film to dispel illusion entirely as they stop the action, throw Arthur into the back of a police van, and then break the film’s fantasy entirely by shoving the cameramen away, and placing a hand over the lens, and saying it’s all over. There’s nothing to see here, folks. Move along.

But of course we can’t give up on these tales. We love our heroes. We need somebody who can replace the old quests with a hero’s quest of this own, which is precisely what detective stories do and why they follow almost exactly the same pattern as the older quest stories.

We swap the holy grail for the Maltese Falcon and we’re back in business. 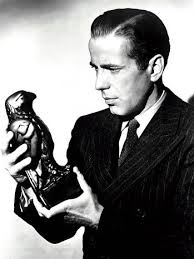